“Challenges for the recovery” 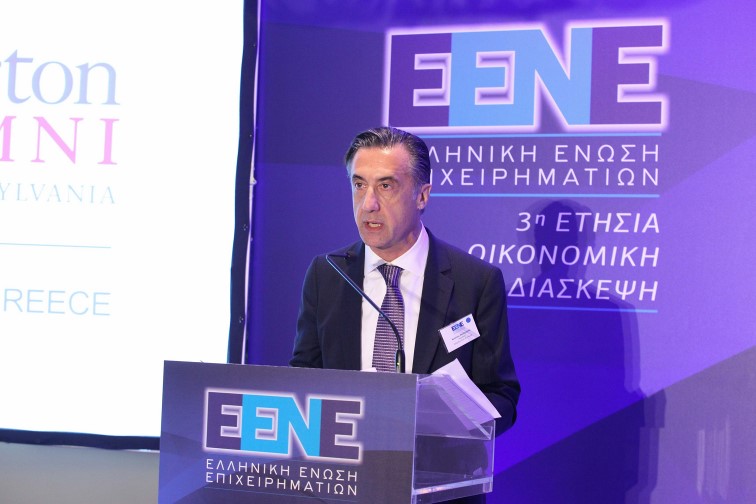 Over 200 entrepreneurs, top representatives of the political and economic leadership, members of diplomatic missions, distinguished academics and business executives attended this year’s 3rd Conference of Greek Entrepreneurs Association (EENE), entitled «Challenges for Recovery". The event was organized in collaboration with the Wharton Alumni Club of Greece and took place on Wednesday, April 20th at «King George Hotel".

Dr. Vasilis Apostolopoulos, EENE President and CEO of the Athens Medical Group, said in his opening remarks, that a national, long -term plan is expected by the Greek businesspeople with a national strategy, which will give a real perspective and dynamic development for the economy.

Mr. Christian Hadjiminas, President of the Wharton Club of Greece and Vice President of EENE discussed extroversion being the main pillar of growth. Furthermore, presenting EENE’s proposals of EENE with regards to fiscal policy, he emphasized the position for the introduction of a «flat marginal tax» of 10 % only for the additional income.

The keynote Speech at the Conference was delivered by the Deputy Prime Minister and Government Representative Ms. Olga Gerovasili, who stressed the government’s emphasis on development and not restrictive measures, while expressing the view that the country is ready to enter an upward trend.

In a keynote speech, the Minister of Defence, Mr. Panos Kammenos, outlined the challenges in the wider region and their geo-economic implications, exercising severe criticism for those inside the country that "politicize" major national security issues.

The conference, among other, addressed the issues of economic development in light of the large challenges in the wider geographical region of NE Europe and the Mediterranean; Greek entrepreneurship as a critical development tool and a key to job creation but also the need for a decisive shift into a productive, extrovert, export led economy that through innovation distinguishes itself from global competition. Focus was also placed on prospects in the fields of Tourism and Shipping, with reference to both the challenges and the investment opportunities that arise. Speakers of the conference included influential personalities of the country's political and business community who seemed in agreement that attracting investment is the major challenge for the process of development.

In particular, the Vice President of opposition party New Democracy, Mr. Kostis Hatzidakis stressed the need to increase entrepreneurship and to 'unlock' investments while the President of SEV, Mr. Theodore Fessas noted that overtaxation gives no incentive nor to the employee, nor to the entrepreneur, nor to society as a whole to create wealth.

In her speech the Minister of Tourism, Ms. Elena Kountoura voiced optimism about the progress of this year's tourist season, while arguing that Greek Tourism succeeded last year to record a significant increase, despite the limited resources and the broader turmoil. Dr. Vasilis Apostolopoulos, in his conclusive speech, stressed that Greek businessmen are ready to support the country's recovery, the exit from the crisis and progress towards long and sustainable development. He also outlined, that the entire political system should aim to serve and defend consistently this national effort.