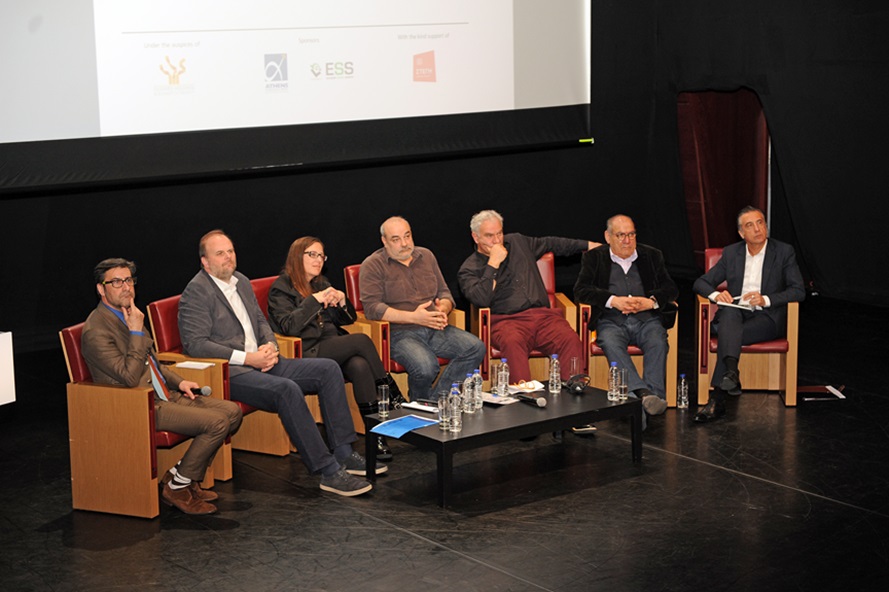 The positive investment prospects but also the difficulties faced by the Greek film industry were the main subjects of discussion at the event “Extroversion …through the Greek Cinema: Coming soon… a brave new world?” that took place on March 29th, organized by Wharton Club of Greece with the support and patrimony of the Hellenic Film Academy and the support of Onassis Cultural Centre.

The audience composition was particularly interesting, mixing professionals of the film industry and actors with business people, on one of the rare occasions where the two “worlds” meet and form a common goal to cooperate.

During his opening remarks, the President of the Alumni Club of the prestigious Wharton University, Christian Ηadjiminas, discussed the principles of extroversion that the Alumni Club loyally serves since 2003 and explained the choice for organizing such an event as follows: the Greek Cinema is able to quickly and efficiently work as a dedicated ambassador and extroversion vehicle for the entire socioeconomical environment. “Our Club supports and looks forward to initiating further awareness from businessmen, so that this ambassador of extroversion, the Greek film industry, that can be rapidly developed through first, the export and promotion of Greek productions abroad and second foreign films produced in Greece”.

Myrto Papathanou presented interesting facts regarding the European Film Industry, with emphasis on the status quo in “competitive” countries as Italy, Croatia and Ireland but also the fiscal motives that exist in European countries.

“We want to ask from the government to stay out of the way and let us do our job”, argued Vassilis Katsoufis, President of the Hellenic Film Academy, while Konstantinos Moraitis, CEO, PAN Entertainment, Digi8, discussed about the current legal and fiscal framework in Greece that in its current design fails to act as facilitator for the investment of movies production.

Tassos Boulmetis Director/Script Writer/Producer, highlighted that the Greek Cinema is a readily available, well-run domestic industry that with some fine tuning is able to transform to a small but dynamic industry assuming it is able to overcome the problems of introversion. “I believe that the main framework shift that needs to happen is the establishment of a relationship between the film production and the private sector”, he explained.

Addressing her speech mainly to the business part of the audience, Fenia Kossovitsa, Producer, Blonde Audiovisual Productions, by asking them to apply political pressure towards the issuance of laws that will work in favor of the film production, but also to urge cooperation towards funding.

The interest of the event reached its peak during the panel discussion, with significant participation from both the film production and the business side, and a clear appetite to continue the “discussion” after the end of the event. The discussion focused mainly on the way the Greek Film Production can make its product appealing for investment, given the private business criteria that producers should take under consideration, but also the businessmen had the opportunity to comprehend the secondary economic benefits that they can capture from the film production. “To be continued…” was the last phrase of the event, with the follow up suggestion to create a working group from the people of the sector that will assume the communication with different stakeholders, including the public sector. Coordinator of the event was Orestis Andreadakis, Director of The Athens International Film Festival-Opening Nights.

The presentations and speeches of the participants are available upon request at [email protected].